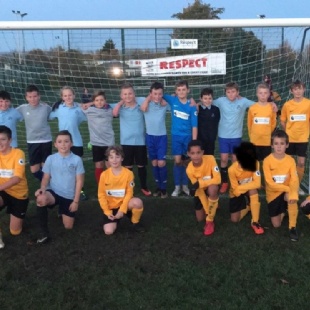 Willingham Primary School travelled away to Bar Hill to play their year 5/6 team.

Bar Hill started off the brighter of the two teams with an early goal their reward. The ball was played in to their unmarked striker who buried the ball past the goalkeeper. Bar Hill kept up the pressure and dominated possession early on. Willingham’s goalkeeper, Nye pulled off a couple of great saves to keep the score down to one but could do nothing about the second goal which was a well taken drive from the edge of the box into the bottom corner. Willingham started to grow into the game and gain confidence as the half went on. Oliver had a great shot just drift past the far post, Willingham’s first attempt on goal. Bar Hill’s third goal summed up their class and ability as their winger cut in from the left, beat two players and curled the ball into the top corner. A real gem of a finish that no goalkeeper could have done anything about. Willingham almost bagged a goal just before half time but Ben’s effort was brilliantly saved by the Bar Hill keeper!

Willingham started off the second half perfectly, Kyle drove into the Bar Hill half, taking it past three players before crossing the ball across the face of goal where Sam buried the chance into the Bar Hill net. Pressure from Willingham continued to build and more chances were created. Dexter hit the post with a shot from just inside the box. Bar Hill weren’t able to get into Willingham’s half as Willingham continued to dominate and defended strongly high up the pitch. Another chance fell to Dexter in a goalmouth scramble, but again, the post came to Bar Hill’s rescue! A couple more chances came Willingham’s way but the ball just wouldn’t go into the back of the net leaving the full time score, 3-1 to the Hill.

Willingham can be proud of their efforts against a very talented and well organised Bar Hill side.